The anarchy was nice while it lasted but there are some new rules around here now. Like, I can blog as long as there’s no talking about poop. I can say waste management if I have to. No mention of butts. I can say bottoms and only if necessary. How’s this gonna work anyways? ‘Oh, did I tell you about the time Catie had a waste management problem? Yes. It was quite stuck to her bottom.’ Who talks like that??  Seriously why can’t a mom be more like a dude – dudes are far more easy going and unoffended by word choice, don’t insist on near as many baths and grooming and paw wipings, and are so much more complacent about dust and dog hair and a little yard dirt.

Mom’s playing funky music with wind chimes and flutes and sounds like water and birds. 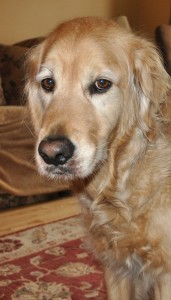 Not to be rude, but it’s not my style at all. It’s way worse than that techo stuff she likes. A little Snoop Dogg or Four Dog Night would be nice for a change.

Trust me. My face doesn’t say half how bad this is.

“I have to practice my yoga,” mom says to Catie and me.

I have no idea what yoga is (except that I’m sure dudes don’t do it) and even though mom’s wearing something bad made of Lycra (and I KNOW dudes don’t wear Lycra either), she’s sitting on the floor. This is usually some strange human invitation of hers for us to play with her.

She gets into a position on her hands, with her butt bottom in the air and her head between her arms.

“This is the downward facing dog,” she says. Her voice sounds funny and faraway because her head is upside down and her face is turning the same colour as the carpet.

I’ve gotta say, she’s not looking like any dog I know. Oh, this is awkward. I look at Catie to see if she’s as embarrassed for mom as I am. Catie licks mom’s face. Mom does a face plant on the carpet and says something that sounds like #$%@#.

Finally, mom lifts her head off the floor and squints at the carpet. Her face is all scrunchy. “Ew. This is disgusting. Look at all this hair.”

I know that look and that tone; this is dog-sucking machine time. I brace for flight.

But she gets up and turns off the bottom-ugly music. “Don’t worry, Rile. I’ll vacuum tomorrow instead. I’m too tired now,” she says and puts on some Madonna. 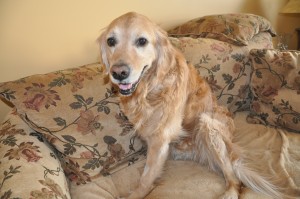 Before you can say Material Girl, Catie’s up on the expensive couch she thinks mom and dad bought just for her, and she’s groovin’ to the tunes.

And me? Look. I’m a pretty easy to please guy but this evening I’ve had to endure to some really twisted new age music that to be honest sounded like waste management, watch mom do weird things on the floor and pretend she was a dog, and now I have to listen to some girlie pop songs. So, I’m breakin’ out the shades and hoping mom gets the hint and plays some hard dude music by Corey Hart. It’s the least she can do. 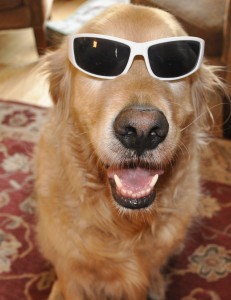