Once upon a time, specifically on this date six years ago, in a cold frozen land way up north — where winter lasts at least six to eight months of the year and human families gather in cosy close huddles around dinner tables that sag with dishes of comforting calorie-loaded carbohydrates; and the weather channel, from sunup to sundown, murmurs nonstop in the background; and the humans eat and listen and sigh and dream of temperatures above zero, eating even more, in despair, as they realize that all the extra consumption of food and the dearth of activity means that by the time the snow melts in April, May or June, they will no longer fit in the spring and summer wear they bought on sale at the end of last year’s season — a litter of nine puppies (3 male and 6 female) was born to Chantily Lace and Sir Galahad in Gibbons, Alberta. 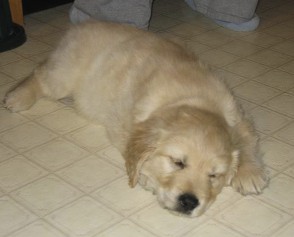 One of them was called Marbrook Max A Million. He was – despite the lotto-sounding name – a happy little guy with a potbelly and paws too big for his body, who scrambled and clambered over his littermates in search of food and a ball to fetch, and eight weeks later would be plucked, without warning, from his siblings and into the arms of a tall woman who’d never chosen a puppy before; wrapped in a blanket and driven miles away – crying the whole time – to a suburb in the big city; given a new home and a new name and a sister named Catie who wasn’t overwhelmed about the chubby creature mom and dad had brought home, who smelled funny and  followed her faithfully, insistently, annoyingly, and eventually broke down her guard, and stole her balls and her other toys and later would take over her blog (he had nothing to do with the loss of his sister’s leg though). 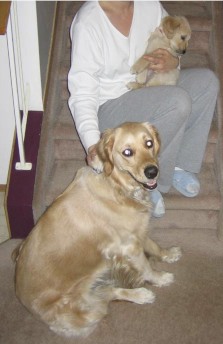 It’s a week of celebration: my birthday; tomorrow is mom and dad’s anniversary (mom can’t remember how many years but she is sure it’s more than six and she’s asking dad for something called liposuction because of all the shortbread cookies she’s eaten on account of winter and now her yoga pants don’t fit like they used to);  on Friday’s it’s Christmas Eve and then on Saturday it’s Christmas and it’s especially special because last Christmas was icky because Catie was sick.

Did I mention it’s my birthday today?

And because I’m six mom said I could wish you all a very, very merry Christmas – from me, from Catie, from mom and dad, and the hares in the front yard, “God bless us, everyone.”


To remove ads from your site and others, upgrade to a Tripawds Supporter blog!

8 thoughts on “A Birthday – The Riley Files”