It’s another one of Catie’s peculiar quirks that she likes to chase her tail. She’s had it for seven years and yet she’s still sometimes surprised it’s there and spins around and around trying to grab it. She’s doing that right now, in front of the pretend tree mom and dad put up in the livingroom a few days ago.

The tree’s pretty in a sparkly, starry, flash-bulb-in-your-eye kind of way. I don’t know why it’s there. Around the same time every year, it gets hauled out of the basement in a big battered box and is assembled smack in front of the window, interfering with necessary people- and hare-watching duties. Mom hasn’t put any decorations on it yet besides the gazillion lights, which is unfortunate because Catie and I like to pluck the baubles off the branches, especially ones that resemble balls (that would be me).

Mom keeps playing the same handful of songs sung by many different artists: Clay Aiken and Martina McBride; Stevie Wonder and Nat King Cole; David Bowie with Bing Crosby; Sarah Brightman, Donna Summer and – you betcha – Josh Groban; songs about chestnuts and open fires, reindeer with red noses, snowmen with silk hats and little dumber boys; holy nights and silent nights; ringing bells, jingle bells, silver bells, sleigh bells – stop with the bells already. Mom’s favourite, naturally, is Baby It’s Cold Outside – she sings to it so enthusiastically Catie and I can’t tell whether she’s enjoying herself or she’s mad. Catie jumps on her; I bark at her; mom thinks we’re digging it but we’re really trying to get her to stop.

I feel a little bad for mom. She can’t do yoga. She can’t sing. And she doesn’t dance very well either. That doesn’t stop her. Sometimes she dances in her pyjamas and sometimes, for no apparent reason, even with her shirt on backwards. She says all women dance by themselves, all over the world, when no one else is around. It says so in a book she read. Now that she’s decided her behaviour is really quite commonplace, she breaks into dance whenever the spirit moves her and believe me, it’s been alarmingly frequent lately. And yes, sometimes she tries to waltz with Catie. Catie gets excited about it. Me? I’ll have no part of it. I’m a dude, for crying out loud.

Despite all this recent nonsense, we love her anyways, even if she’s goofy and dances when she’s by herself; even though she thinks it’s cute to dress Catie and me up in scarves and make us wear boots when it’s cold; and even though I get a little perturbed when mom makes me wear one of Catie’s pink boots (Catie only needs three of hers and I keep losing mine in snow banks). 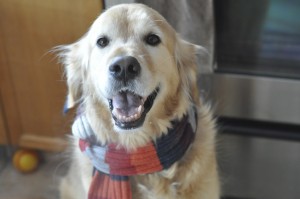 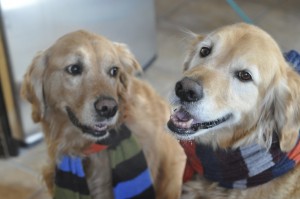 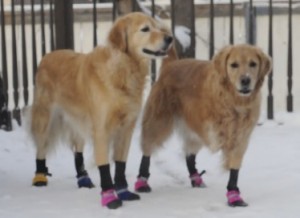 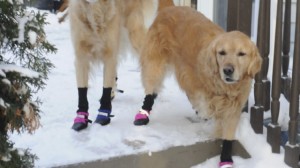 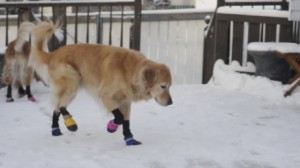 To remove ads from your site and others, upgrade to a Tripawds Supporter blog!

7 thoughts on “Bells, Baubles and Boots – The Riley Files”